West Seattle Herald: "Recently announced serious cuts to King County Metro Bus service should a funding solution not be found motivated the group to action. The cuts would amount to 17% resulting in the loss of several important bus routes serving West Seattle.
Cuts will affect eight out of every 10 riders, with more than 70 routes eliminated completely. These transit reductions will place an estimated additional 10,000 cars on our overtaxed West Seattle roadways." 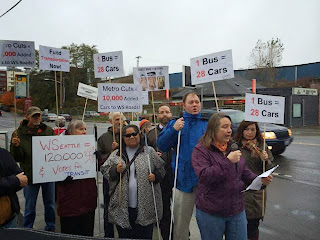 Move King County Now: "Fitzgibbon, McDermott, & Rasmussen join with the West Seattle Transportation Coalition and other West Seattle leaders to rally in support of saving Metro from 17% bus cuts."
at 7:18 PM No comments:

Legislators Jump to Deliver Tax Breaks for Boeing; Tough Luck for Transit | Transit Riders Union: "Rodney Tom and his cohorts are only too happy to hop over to Olympia for a special session to give Boeing, a Fortune 500 Company, “one of the biggest tax-break bills in Washington-state history” (according to the Washington State Wire)–tax money that Metro sorely needs. But to save bus service and retain a decent transportation system for King County that allows riders to get to work, school, and everywhere else they need to go—for this Rodney Tom tell us “Tough.”"