By Neal R. Peirce
Transportation funding: Transit systems drive our future | OregonLive.com: "It's straightforward, argues the New York-based Regional Plan Association (RPA). Transportation, it asserts, isn't just a question of patching a few potholes or cleaning dirty subway cars. It's a matter of the national future -- whether our economy hums or shrinks, carrying our standard of living down with it.

Illustrating its point, RPA cites the case of America's top 10 transit regions, among them New York, Los Angeles, Chicago, Boston and Atlanta. Collectively, the 10 regions represent a third of America's economic output and a quarter of our population. And they're projected to grow 26 percent --90 million people -- in the next 30 years. "

Pledge to reduce driving and get your UnDrivers License

History | Undriving & Undriver Licensing: "Undriving™ was invented in 2007 within the innovative Seattle neighborhood group, Sustainable Ballard. Projects in this all-volunteer group arise where there’s passion, and one man who adamantly thought no one should drive a car was beating the drum in the group’s Transportation Guild. Yes, cars are a huge part of the climate crisis – but what could we do that was engaging, inviting, even fun? After months of discussion our founder coined the term Undriving – and the idea for the Undriver License™ followed closely on its heels. From there, the whole program practically designed itself!" 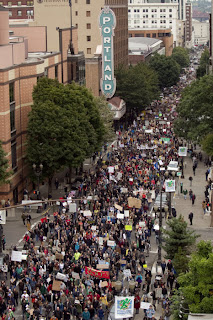 Portland, OR
via http://www.buzzfeed.com/mjs538/cities-that-have-joined-the-occupied-movement
at 5:34 PM No comments:

Transit passengers to ride for free next week 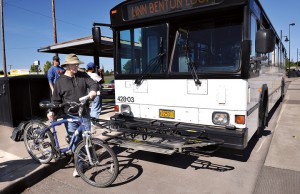 Richard Hackett of Corvallis places his bike on the Linn-Benton Loop bus. Hackett rides his bike on the mornings he visits his father in Albany but takes the bus on the way back across the river. (Mark Ylen/Democrat-Herald)
Read more: http://democratherald.com/news/local/article_b942f994-eb2a-11e0-8010-001cc4c03286.html#ixzz1ZVz0ddMF
Transit passengers to ride for free next week: "Passengers on most mid-valley public transportation systems can ride for free on regular routes during Try Transit Week Oct. 2-8, the city of Albany announced.
This year, Albany Transit System, Albany Call-A-Ride, the Linn-Benton Loop, and the Linn Shuttle will all be participating by offering free rides. Corvallis Transit System provides fare-less transportation year round."