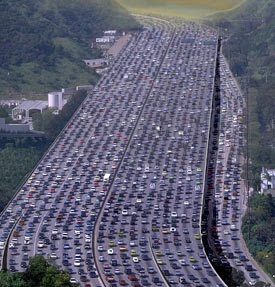 ~ Atlantic Cities reports on a mid-size French town that has had free public transit for more than a decade. Châteauroux has seen its ridership double. Meanwhile in only 3 years a metro area west of Paris has seen use go up 170% even as private vehicle traffic volumes fell 10%.

Like many transit systems, the fare box makes up only a small percentage of system revenue. Eliminating the infrastructure and logistics of fare collection, with minor adjustments to other funding sources, can allow transit systems to be profitable as well as more usable.

Shared transportation is a public good and a desirable and necessary part of civic infrastructure. Like sidewalks, parks, trails and other similar public space amenities, it should be free, easy to use and widely available. Most cities in the US still have quite a ways to go.

Originally posted on Chris Leyerle's blog.
at 1:00 PM No comments:

Chris B. Leyerle: Making Public Transit Harder to Take: "I have never seen the tunnel so jammed with buses. As people patiently filed through the front doors to pay their fares, more rush hour commuters kept streaming down the stairs. The drivers would shut their doors, but the buses in front didn't move, and they'd end up opening the doors again to let more people on. The 218 was already standing-room-only at Westlake, and by the Pioneer Square Station, there was no more room for anyone else to get on.
"

The End of the Ride Free Area 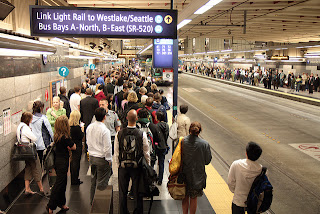 So shouted the tired office worker in the direction of the Metro Transit bus driver down the Westlake Station platform of the Seattle Transit Tunnel.

The driver didn't respond. The commuter, wearily, headed toward the front door of the bus, annoyance clearly visible on her face. Boarding through all doors was already a dim memory.

It was just past 5:30 on the first weekday following the elimination of Seattle's downtown ride free area and clearly not everyone was with the new program. Metro did away with the downtown Ride Free Area in an attempt to save the $2.2M of evaded fares in their operating budget of $549M. Those relatively meager (and theoretical) savings are changing the ease, appeal and convenience of taking public transit.